As part of breaking with the heterosexual matrix and its dominans, both series question our idea of marriage as the destination for a happy, fulfilling life. With this, both Sense8 and Transparent points to those structures (marriage and monogamist relationship constellations) that are part of making sure the idea of the heterosexual matrix is seen as natural and ‘right’ – this is challenged by the sexuality of the characters.

Sense8 portrays a break with the stereotypical portrayal of male homosexuality in the medias through the Mexican sensate, Lito. Beside this, Lito’s storyline is also part of challenging the idea of monogamy and ‘traditional’ relationship constellations. Lito is especially interesting, since he becomes the embodiment of just how much the heterosexual matrix can affect identities that break with this discourse. In the presentation of Lito, it is already indicated how torn he is. It is especially evident when he, during the shooting of his new movie (Lito is an actor), is alone in his trailer where he is talking to himself trying to get a grip and be able to finish the scene: “Who are you? Who am I? Blow your fucking brains out. Where’s that coming from?” (22:53 in Limbic Resonans). He punches himself in the head while repeating: “Who am I? I’m Tino El Caido. I’m the fallen one” (ibid.: 23:05) – and points to a picture of himself:

The camera is placed behind Lito, depicting him looking at a picture of himself as ‘the actor Lito’, which is further underlined by the mirror, where we see his face. This over-the-shoulder frame makes sure that the viewer sees what he sees while at the same time looking at him from the outside, as an onlooker. The intention is clear: Lito is torn between being two people at the same time – the person his fans see, while Lito, and the viewer, have gained access to another, more private, side of him.

As a reaction to living this double life, he starts to hump the wall in a very ‘masculine’ way. As if he is trying to convince himself that he is a ‘real’ man who does not have trouble performing: 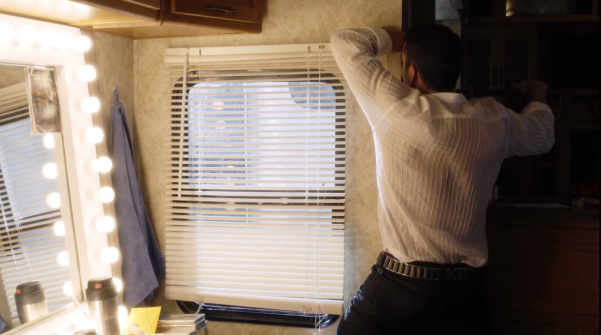 “I’m a man! Bah – Bah-pah!”, he exclaims, while looking like someone who gradually starts doubting it. This is underlined by the scene pictured above where the venetian blind might insinuate bars. These bars become almost symbolically depicted in the mirror, which further underlines this feeling of being caved in, imprisoned. Not only is he imprisoned by society (the trailer could be understood as a symbolic prison), but also by ‘himself’ (the mirror as a reference to the fact that he can no longer see himself). With this in mind, Lito is imprisoned by the heteronormative discourses that dominates society and the media world. His repeated attempt to ‘out’ himself as a liar might insinuate that Lito’s hyper-masculine appearance is nothing more than a performance he too is captured by.

As Ali’s identity journey continues, she questions both her own understanding of gender as well as sexuality. This means she goes from being only attracted to: “dudes (…) dudely-dude, dude. The dudelier the better” (11:25 in The Wilderness):

to being queer and in a relationship with her best friend, Syd (Carrie Brownstein).

Ali goes from being heterosexual to queer in a fairly short amount of time, which brings her to question more than just her sexuality:

Ali: (…) I’m just saying, what if we didn’t just have this sort knee-jerk heteronormative…

Syd: (…) Listen to yourself, you’ve been queer for like 30 seconds?

A: See, that’s my point (…) What is being queer if not questioning everything, right? What it means to be… to be in a relationship it’s loving and trusting and generous… and we can do that however we want. We can make up our own rules (…) Just be open and brave

She starts questioning the idea of monogamy. This means that Ali throughout the series is a character that breaks with the classical idea of relationship constellations. This can be a way for the people behind Transparent to open up discussions on relationships by representing characters that seems to favor ‘open relationships’ as well as embodying queer identities.

This might be helpful to people who do not understand what queer is – here, Ali is the example of how much the term (according to herself) potentially entails (this is not to say that all queer agree with this definition (case in point)).

Despite the fact that Transparent does not define queer specifically, the series puts the term on the agenda and thereby shift the general understanding that you are either man or woman, straight or gay or that a relationship has to be monogamous.