“The very idea that there are “opposite” sexes unnecessarily polarized women and men; it isolates us from one another and exaggerates our differences” (Serano 2016: 103). In this way, according to Serano, it is possible to project other oppositions on to ‘men’ (and ‘masculinity’) and ‘women’ (and ‘femininity’), such as aggressive and strong (men) in contrast to passive and weak (women).

In the documentary Miss Representation (2011) (Investigates the under-representation of women in powerful positions in the States and challenges the media’s very limited portration of what it means to be a woman in power) Ed.D., writer, and filmmaker Jean Kilbourne, state that:

Girls get the message from very early on that what’s most important is how they look. That their value, their worth, depends on that (…) We get it from advertising, from films. We get it from television shows, videogames – everywhere we look

The things young girls are submitted to as natural truths affect how they do their gender later in life. This is evident in relation to the sexy body as a power tool. Because of this belief, it is important to make sure the body remains sexy through constant attention, surveillance, and discipline. This is reinforced by the media, since the sexy body is central to the discussion of what it means to be feminine, which is why, the sexy body is one of the most important aspects of being a woman (Gill 2016: 255). The way in which the media constructs this need to look a certain way can be seen in relation to the focus on ‘reclaiming’ the right to sexuality (jf. Fourth Wave Feminism), in which a new subject position has been created: The sexual entrepreneur (Harvey & Gill 2013: 52). Sexual entrepreneurship, inspired by Foucault’s notion of power, is a term, that can be used to explain gender, power, and resistance. In Foucault’s later work, he viewed the subject as a result of ‘technologies of the self’, where the subject has a form of co-determination though it is still limited by certain discourses .

This is useful when looking at sexuality in which there are two notions that both make up the idea of sexual entrepenaurship: : ‘sexual subjectification’ (Gill) (how power works in and through subjects) and ‘technology of sexiness’ (Radner) (the literary heroin has gone from having to protect her virginity to appearing as a attractive, heterosexual individual, that focuses on her looks through makeup, clothes and training).

This subject-position (offered by prevalent discourses) means that women today present themselves in an objectifying way, since they see themselves as sexual subjects rather than objects (interpellation):

Nowhere is this clearer than in advertising which has responded to feminist critiques by constructing a new figure to sell to young women: the sexually autonomous heterosexual young woman who plays with her sexual power and is forever ‘up for it’

Since gender is constructed, equality is about transforming culture in a way that does not limit nor dictate either boys or girls to do their gender in a certain way. We therefore find, that it is crucial to involve men and masculinity in the fight for gender equality. Not just as advocates, as many have been, but also on a theoretical level. Because, if hyperfemininity is unhealthy for girls, how healthy is hypermasculinity for boys (and women)?

Kimmel thinks, it is crucial to involve masculinity in the feminist approach to gender. This, because masculinity should be redefined in a way, that dis-associates it from violence, power, and entitlement, so that we as a society can protect both men and women. Political researcher and teacher Dr. Caroline Heldman supports this in the documentary The Mask You Live In (2015) (Looks at how our limited definition of masculinity hurts boys, men, and society at large)

Kimmel points to the fact, that the debate about masculinity already exists, the problem is, that it is invisible. He emphasises this by asking:

The answer is simple: men. Young men. From lower social classes. Trouble is, according to Kimmel, that the debate surrounding this fail to mention that the idea of masculinity is an important factor (ibid.). Especially the hegemonic definition of masculinity is a problem for men’s self-image:

(…) young, married, white, urban, northern, heterosexual, Protestant, father, of college education, fully employed, of good complexion, weight, and height, a recent record in sports … Any male who fails to qualify in any one of these ways is likely to view himself – during moments at least – as unworthy, incomplete, and inferior 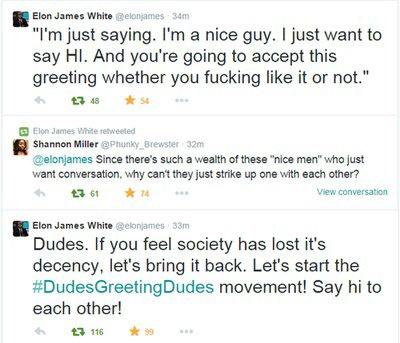 Masculinity and the Media

Kimmel argues that the media reflects gender identities that already exists in society today by having ‘his’ and ‘her’ media (Kimmel 2017: 352). In relation to this, he points out that women can read and watch ‘his media’, but men perceive ‘her media’ as degrading and as a thread to his masculinity (ibid.). Language too, is a factor that creates inequality between genders, since role models such as parents or coaches use phrases like ‘You play like a girl’, ‘Don’t be a girl about it’, ‘Man up’, og ‘Soft crap’? (Newsom 2015: 43:25). Serano supports this, since she thinks true equality can only be achieved, when boys learn to embrace ‘girl’s stuff’: “Because male pride is not really about pride. It’s about fear – the fear of being seen as feminine. And that’s why “girl stuff” is so dangerous” (Serano 2016: 316).

Newsom, Jennifer Siebel (2015): The Mask You Live In, The Representation Project.

Indeed, the widely cited point that Gender Trouble made was the following: that categories like butch and femme were not copies of a more originary heterosexuality, but they showed how the so-called originals, men and women within the heterosexual frame, are similarly constructed, performatively established

Serano places this understanding of the categories ‘men’ and ‘women’ as being constructed in a wider societal context by relating it to that form of sexism that has emerged because dominating discourses are maintaining the illusion that men and women are irreconcilable different:

Once we start thinking about gender as being socially exaggerated (rather than socially constructed), we can finally tackle the issue of sexism in our society without having to dismiss or undermine biological sex in the process. While biological gender differences are very real, most of the connotations, values, and assumptions we associate with female and male biology are not

This means, that the ‘understandable’ binary gender categories, woman and man, cannot be neglected completely. Serano explains how she (and other trans* persons including MTF (male-to-female) and FTM (female-to-male)) experienced changes in people’s behavior, when she started taking estrogen in order to be aligned with her subconscious gender (REFERER TIL Queer). This, however, does not change to fact that socialization processes affect girls and boys to exaggerate their biological characteristics (Serano 2016: 101).

In line with Butler, American sociologist and gender researcher specializing in men and masculinity, Dr. Michael Kimmel, thinks that (social/cultural) gender is something you do and not something you are (Kimmel 2017: 147). According to Kimmel, we become our gender-divided self in a gender-divided society through social institutions such as workplaces, families, media, schools, and politics.

The media participate in the sustaining and reproducing of the inequality that exists between the genders, which means that the understanding of men and women as binary oppositions becomes natural (ibid.: 348). Kimmel thinks, that gender differences are a result of inequality between the genders — not the other way around (ibid.: 59). A comprehensive debate of gender requires that we acknowledge, that the terms ‘masculinity’ and ‘femininity’ are constructed. To do your gender is something you learn through coded messages directed at either girls or boys, which means that being a gender is based on a cognitive decision. This acquisition starts when are born (differences in toys, colors and so on) and are reinforced when you start school. Here, boys are shaped into being active, competent, aggressive, and capable of expressing rage. Girls, on the other hand, are shaped into being passive, loving, responsible and stubborn. Kimmel criticises earlier research in the difference between men and women, since it was normal, historically speaking, to find scientific proof of differences in correlation with brain seize, academic abilities, child raising, genes, and hormones both within the fields of social science, behavioral science, natural science, and biology. This, only because they were determined to find such results.